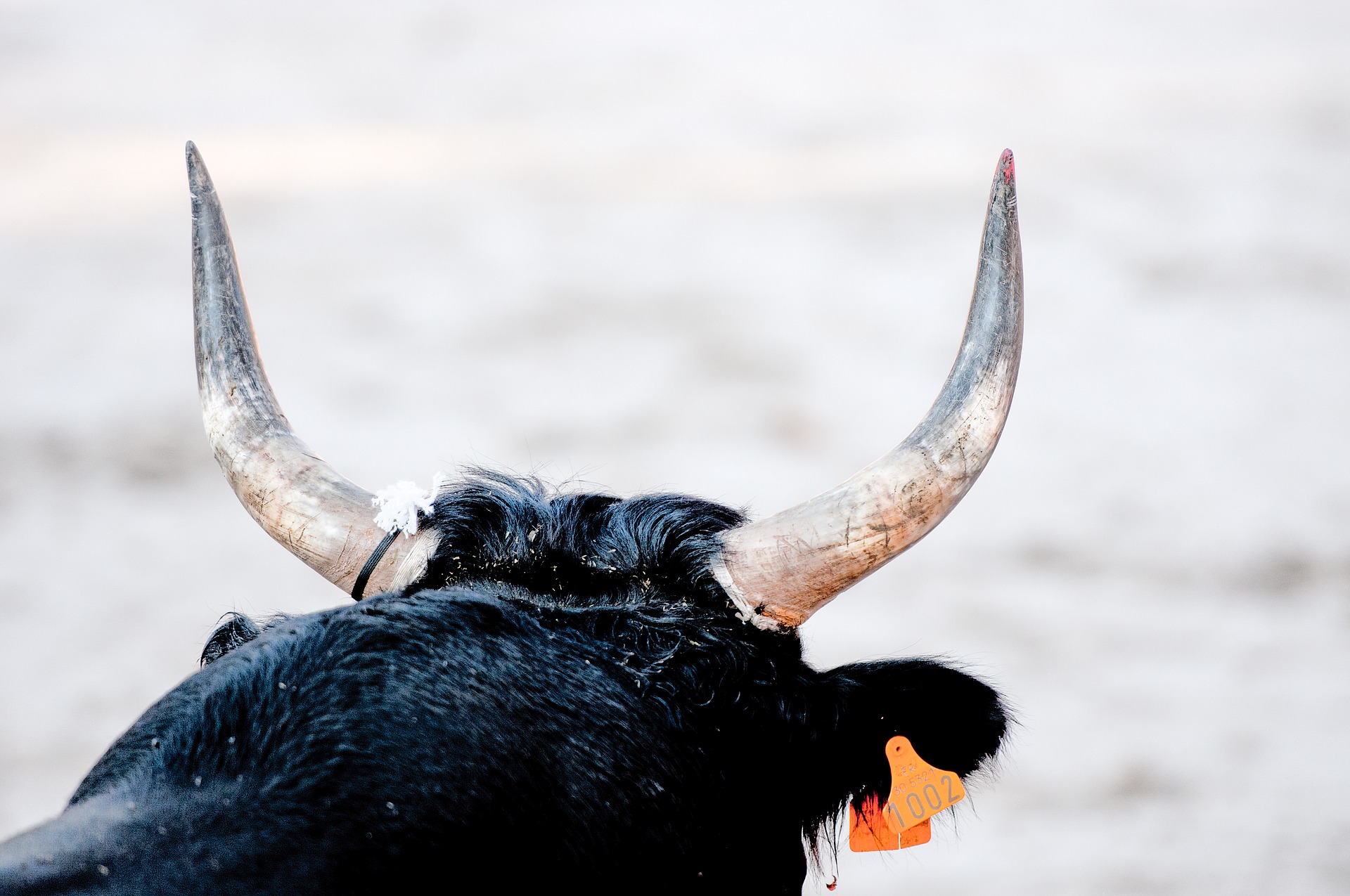 The massive bull weighed two thousand pounds. Well, two thousand and nine actually, according to the auctioneer’s official scale reading, and he did not want to get into the trailer. And I had never tried to put a bull in a trailer before. A few cows, yes. A bull, no. Two of us stood inside the pen attempting to get the enormous all-black specimen of muscle-and-bone turned around and headed down the narrow chute that led to the trailer. As the creature anxiously whirled and turned to avoid us, its frightful bucking literally shook the ground. Its agitated snorting sounded like the air brakes of a semi-tractor trailer. I thought I might have seen a wisp of smoke trailing from his nostrils.

The sun blazed overhead, illuminating our endeavors, making things hot and malodorous. The elderly man who owned the bull stood outside the pen shouting commands at us andat the bull, but we weren’t making much progress. The big fella kept charging the opposite direction. I was reluctant (to say the least) to stand in his way, but standing in the bull’s way was precisely what we had to do if we ever hoped to get him into the trailer. So we kept at it, diving this way, jumping that way, climbing the fence, flailing our arms, shouting, and whistling. This beast would have none of it.

After a few minutes of earthshaking protestations, the hulk stopped for a few seconds, cocked his head to the side, and glared at me. A flash of sunlight sparked within his colossal eye, or maybe it was some sort of subterranean nuclear furnace deep within him. Either way, it seemed to be a warning: do NOT come any closer.

Well, it was too late for that. The animal’s mammoth head was not a foot from where I stood. I felt pretty foolish. There I was, backed up against the iron pipe fence railing, sweating like a virgin rodeo clown, wondering if I could maintain my footing should I fail to dodge one of the multitudinous landmines– I mean manure piles– between me and him.

I noticed a large wooden two-by-four laying on the ground a few feet away. But as long as Helios’[1] gargantuan quadruped kept eying me, I was not gonna move. The other gentleman in the pen distracted the bull. The animal spun around with his back toward me and headed toward the chute. For the moment it did not appear I would be impaled on the fence post by angry rump roast.

I grabbed the plank.

Well, yes, that was my initial thought.  But what was I thinking? I was sure folks would tell the story for years.  “Dan?  Really?  How’d he die?”  “Oh, he decided it was a good idea to stand behind a bull and hit it with a two-by-four.  Got got kicked clear ‘cross the county line.”  Hmph.  As the Lord says, “For every beast of the forest is Mine, The cattle on a thousand hills.”[2] In an instant, God, rodeos, and the universe all passed before me. I was about to strike this one of the Lord’s.

So there I was with beam in hand, facing the manure-stained, fly-covered derriere of the truculent behemoth, contemplating the potential consequences of striking one of the God’s most powerful creatures, as humanely as possible of course, on the backside. To hit him, I’d have to get closer. Nonetheless, I had to act. I took a step closer. Like a major-leaguer swinging for the fence, I took my cut  at the leather and hoped for the best.

Though I made contact, it felt like hitting a sack of concrete. The bull did wasn’t fazed by it in the least; mildly nonplussed perhaps. The owner shouted again. “Hit him!”

Ok. I decided to put a little more sauce into it this time. Whack! Discomfiting shock waves traveled all the way up my arms. Thankfully, after a slight pause, the bull decided to meander down the chute and into the trailer. He leapt up onto the deck causing both the trailer and the truck rattle and shake. I counted myself fortunate to have survived the encounter.

So there I was in the bull pen, unexpectedly finding myself living out on earth what has been written in the heavens since the dawn of time. A fool with an old fence-post club in hand, staring into the fiery sun-glinted eye of an enormous and irritated monster, trying not to get crushed. “Am I a dog that you come at me with sticks?”[3] the bull might have been thinking.

There are days – many of them – where I feel what I do is pointless, that I’ve wasted my life and made so many bad decisions, my anger, sins, overtake me and drown me in a sea of self. If I would have had it my way, I would have been in a major-league baseball bullpen as a catcher, not a real bull pen as a rodeo clown. Perhaps I should have been more specific in my requests to God about my career ambitions. But either way, all this to point out that I get very easily irritated when it’s hot, frustrated when morning coffee tastes like tar, and worried when I can’t function like the adult everyone expects I should be. A stubbed toe, lost keys, the smallest trifle of circumstances can set me down a path to despair faster than a meteor flash. So that day, standing in front of a bull I did not much care what was going to happen to me. “Come on dude. Go ahead. Knock me over the wall. I don’t care anymore.”

In the midst of such menial tasks, I often think the Lord has forgotten about me. Maybe you do too. Maybe you do not even believe in Jesus. Whatever you believe, you have probably at some point looked at your surroundings and experienced an overwhelming sense of futility. No one notices what you’re doing. No one seems to care. I look around my little converted-barn apartment and survey the mess that it is, that familiar sense of paralyzing futility hits me pretty hard, especially as a single person. No one to help me with the trifling little details that overwhelm me. There is often so much to be done that feels mentally beyond my ability to even begin. When cutting up a huge oak tree for firewood the other day in 90-degree weather, I exhausted myself to the point I could barely walk. Whether it is the sun, a bull, even a gnat in my face, or a twitching muscle, all of nature seems conspired against me to remind me of my frailty and fallen nature. Within the eye of Taurus, the wings of a gnat or the unrelenting rays of the sun or minor twitching of a finger or toe, lies the power to render me powerless. Foolish, I know, but there it is. Maybe you can relate.

Jesus’s own humble beginning included being turned away from the shingled roofs and comfort of an inn. As He grew, He likely learned all about household chores and more than likely some kind of craftsmanship[4] skills from His earthly Father Joseph. In that way, He was every bit as human as we are. The One who knows our frame, who framed us Himself, learns how to frame stuff from his earthly dad. That simply astounds me. The very One who created endless trillions upon trillions of stars with His “fingers” (see Psalm 8:3), humbles Himself enough to enter our domesticity and learn earthly craft-making skills of some kind. That is extraordinary. Seems almost, well, foolish. Why in the world would He do that?

This is what I think the apostle Paul is getting at his letter to the Philippians when he writes of Jesus laying aside His glory. There in Paul’s little epistle is the universe in a nutshell. Paul tells us that the Artist of the Universe, our Creator, comes down and gives up all personal rights, privileges and honor as the Son of God because of His love for us. Down comes the Architect-Playwright of the hauntingly gorgeous Sombrero, Whirlpool and Andromeda galaxies (just to name a few) to our world who maybe has chores, and learns how to make a clay pot, frame a table, and clean a house.

Because He loves you.

Daniel was the second graduate right behind Zak from the on-line MA in Christian apologetics from Houston Baptist University. He has taught elementary, middle and high school, and is a co-editor of a forthcoming book The Story of the Cosmos (Harvest House, August 2019), a collection of essays from astronomers, a theologian or two, astrophysicists, literary scholars and laymen, each sharing their insights about the glory the heavens declare. He is also the cohost of a little podcast called Good Heavens! A Podcast about the Universe with Wayne and Dan. In his spare time, Daniel runs, reads, writes, stargazes, and bakes apple pie from scratch.

[1] Helios is the sun god mentioned in Homer’s Odyssey whose cattle were sacred and were not to be handled or touched by man. Yet Odysseus and his crew, after landing on the island of Thrinacia where the cattle roamed, hungry and weary from their travails, decided to sacrifice the cattle to the gods and have a barbeque.

[4] The Greek says Joseph was a “tekton”, a generic term meaning “craftsman”. The translation of “carpenter” does not convey the more general nature of the term.