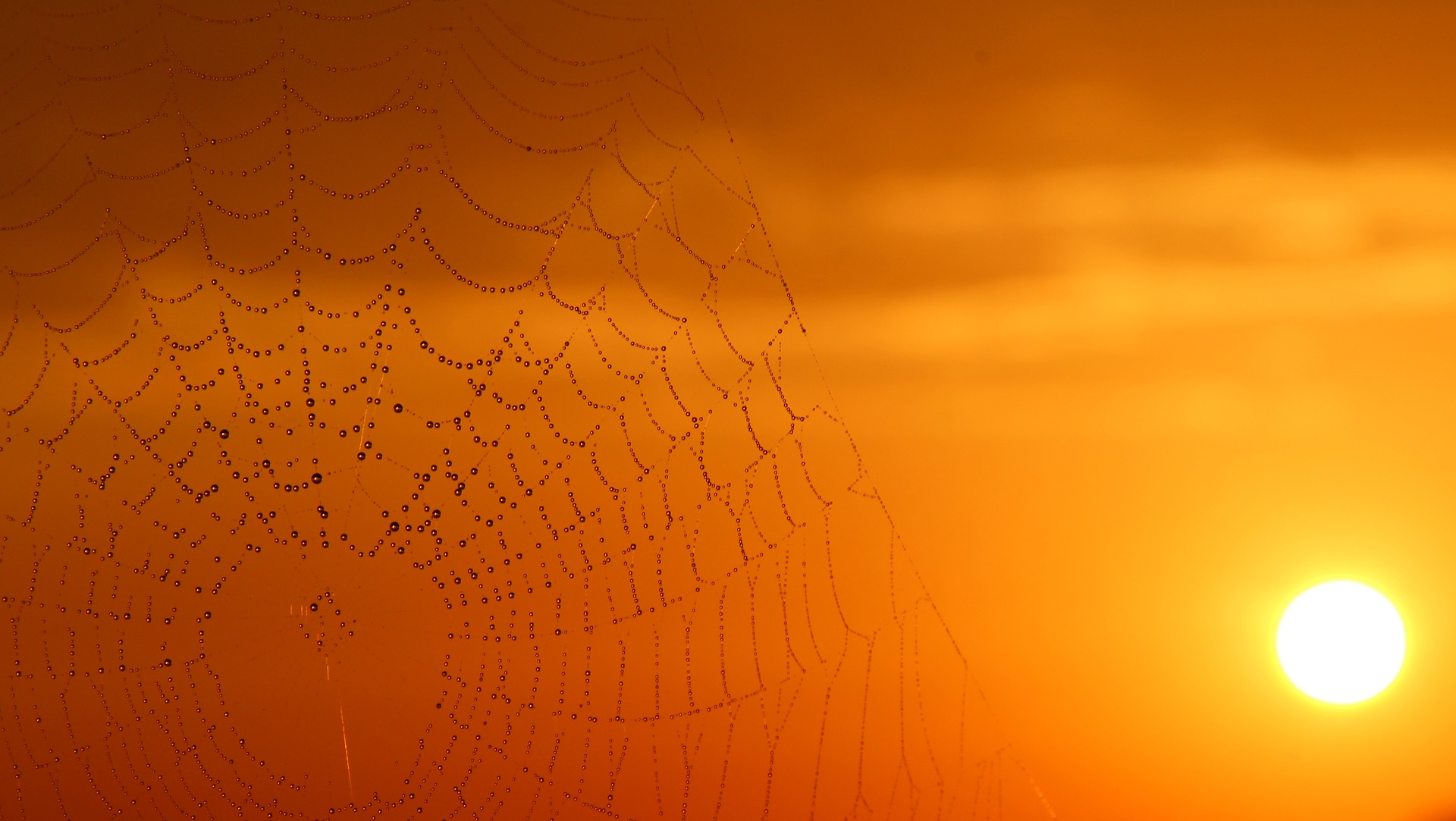 “If a man feels that all the movements of his own mind are meaningless, then his mind is meaningless, and he is meaningless; and it does not mean anything to attempt to discover his meaning. Most fundamental sceptics appear to survive, because they are not consistently sceptical and not at all fundamental.” ~ G.K. Chesterton

A crowd of reporters gathered like flies, pressing into the reclusive scientist’s tiny lab. The prodigious author, famous for his tirades against religion, was finally granting a face-to-face interview to a select group of reporters. It was none other than the brilliant and bellicose Dr. A. Rachnid, Oxford scholar and Nobel Prize winning geneticist, one of the most ferocious and feared thinkers. For decades, he had written countless works in which he found new ways to debunk belief in God. “I think, therefore I am a skeptic” was his most famous saying. Notepads in hand and craving the intoxication of controversy, the journalists were ready to record the tireless crusader’s every word.

From within the recesses of the dark and dank room, Rachnid slowly emerged from behind beaker-strewn benches and shelves lined with organisms on display, forever drowning in formaldehyde-filled jars.

“If this interview works as I intend,” he spoke in breathless tones as he approached the crowd, “every religious person who reads it will be an atheist by the time they are finished.”[1]

“He must be very knowledgeable,” the people whispered as they surveyed the lab.  Countless machines ticked and hummed like busy insects. Rivers of data points flooded across multiple screens, casting out an eerie luminosity that caused the scientist’s spectacles to glow like miniature moons.

“Ladies and gentlemen, thank you for joining me for this momentous occasion as I grant my first interview.” Pens and pencils moved furiously. “My words will free you, once and for all, from your infantile God delusion. There is no transcendent, personal source of the universe, my friends, and I have the proof,” he hummed in tune with the machines. His words wound round and round the crowd. The people were captivated by their assertive tones.

“DNA is all that is, and was, and ever will be!” he exclaimed, directing their attention to the computer screens where lines of A-T-G-C’s moved in neverending waves. “‘DNA neither cares nor knows. DNA just is. And we dance to its music.’[2] It is the god in whom we live and move and have our being.”

The crowd shivered, yet something in his voice summoned them to press further into his lair-like lab. They were suspended, hanging on every word as if their lives depended on it.

“You are here not because of divine providence, but merely because your ancestors happened to survive and pass on genes. There is no more meaning to your existence than there is behind the movement of molecules,” he continued. “All Life is nothing but a vast stream of information, mindlessly and heartlessly coursing through the ages.Meaningless, meaningless, it is all meaningless!”

The crowd gasped in delighted disbelief and fear. What daring! What boldness! What knowledge!

A voice then asked, “Are your words then meaningless, too, sir?”

The crowd let out a gasp. Who was this that dared question the scientist? They peered about the lab, searching for the questioner.

“I’ll talk to you of meaninglessness,” the scientist roared in response, riveting the crowd’s attention once more. “Consider, my friends, the amount of suffering that is going on this very minute, as I speak. Now multiply that by the vast eons of time since life had the great misfortune to arise on this god-forsaken planet. This total amount of suffering is ‘beyond all decent contemplation.’[3] Indeed, before I finish this sentence, ‘thousands of animals are being eaten alive, many others are running for their lives, whimpering with fear, others are slowly being devoured from within by rasping parasites, thousands of all kinds are dying of starvation, thirst, and disease.’[4] All life is born into this den of chaos; it spends its entire existence fighting off death, only to succumb to it in the end. The earth remembers it no more. The grass withers and the flower fades. Only these words stand forever: ‘In a universe of electrons and selfish genes, blind physical forces and genetic replication, some people are going to get hurt, other people are going to get lucky, and you won’t find any rhyme or reason in it, nor any justice.[5] Nothing but ‘pitiless indifference’ greets us from an infinite nothing.”[6]

The crowd murmured a dull acceptance.

The small voice spoke again, sending a jolt through the crowd. “Dr. Rachnid, ‘if the whole universe has no meaning, we should never have found out that it has no meaning: just as, if there were no light in the universe and therefore no creatures with eyes, we should never know it was dark. Dark would be a word without meaning.’[7] Surely, a mere product of random and impersonal forces would never worry about a thing called meaning, much less go to the trouble of writing books that describe what the meaninglessness means.”

The crowd then spied the young interlocutor, standing in the doorway. Light from the sunlit hallway behind poured into the lab, outlining her fairy-like form.

“My dear child,” Dr. Rachnid impatiently hissed, pulling back into the darkness as the light reached him, “our forefathers once believed in such quaint notions as good and bad, but science has since revealed these to be merely useful fictions for children who are still afraid of the dark. We are older now, and so much wiser. For the first time in history, science has enabled humanity to ‘leave the crybaby phase, and finally come of age.’[8] We can now take charge of our own evolution, molding ourselves into what we desire with the power of science! Your non-existent God will not rescue you. I defy all thought of him!”

“Such knowledge is too wonderful for us!” cried the crowd as the doors of the laboratory slammed shut, trapping them inside the dark room.

“Fear not!” he cried as they encircled him, “I will show the way. Who needs the comfort of your sky-god, when you have science and me! With us, all things all are possible!” With that, he flipped a switch in the corner of the room that lit up a garishly painted array of stars on the ceiling.[9] They reflected the light from the fluorescent bulb with a deadened glow as the laboratory equipment drummed on.

“My words alone rise above the meaninglessness of this world. I can give your life meaning!” the famous scientist bellowed.

The young girl then suddenly appeared beside him, shining in the darkness like the Evening Star. The light smote the hearts of the crowd with its beauty.[10] Approaching the scientist, she gently took his hand. Instantly, the crowded laboratory disappeared and darkness engulfed him. All was silent and cold. Only a flimsy web of silky substance kept him from falling into the nothingness. The warmth of a bright light beckoned from above and he could feel the girl’s hand in his, warm and steady.

“Could this be real?” he thought, as he felt himself waving back and forth in the web. Slipping down, he grasped the girl’s hand, for small as it was, it was unusually strong and clearly the only thing between him and his demise. The light made him feel minuscule and inconsequential, yet surprisingly he was comforted. As if one of his microscopes was directed down into his innermost being, through joints and marrow, he suddenly knew himself for what he was. Forgiveness began to envelop him.

He started to wonder if he was the one who had been deluded all along. The light seemed to shine brighter, now, and he felt himself being lifted out of the web. He could feel something inside himself soften.

“My heart?” he wondered to himself. Then, he detected a familiar sensation begin to rise up within him and the darkness below him grew.

“Yes, there is that old foolishness,” he scoffed aloud with disgust, “and I won’t be caught in the delusion again!” Concluding that he had clearly gone mad, he reached for the packet of poison he kept on his person for just such an occasion, consumed it, and died. The crowd was astonished.

Moved by pity for him, the girl then transformed his lifeless body into a living spider.

“I am Minerva,” she said, “wisdom herself and the source of the rationality by which you weave your arguments against God. Adam Rachnid, since you have reduced the cosmos to mere nature, then mere nature you will be.”[11]

That was many years ago and Dr. Rachnid’s lab has since changed hands. There are windows in the lab now and the ceiling has been painted over. A few of the machines are still there, but all of the dead things have been removed. One of the scientist’s students who witnessed his death now oversees its bustling activity.

Back in a corner, a spider has woven a large web of the most perfect lines and proportions. It glistens in radiant response to the light that pours in from a window nearby, causing all who see it to marvel at its beauty.

Rebekah Valerius is a graduate of the MA in Apologetics program at HBU. She is a wife and homeschooling mother of two. You can see more of her writing at www.alongthebeam.com.

There are no upcoming events at this time.