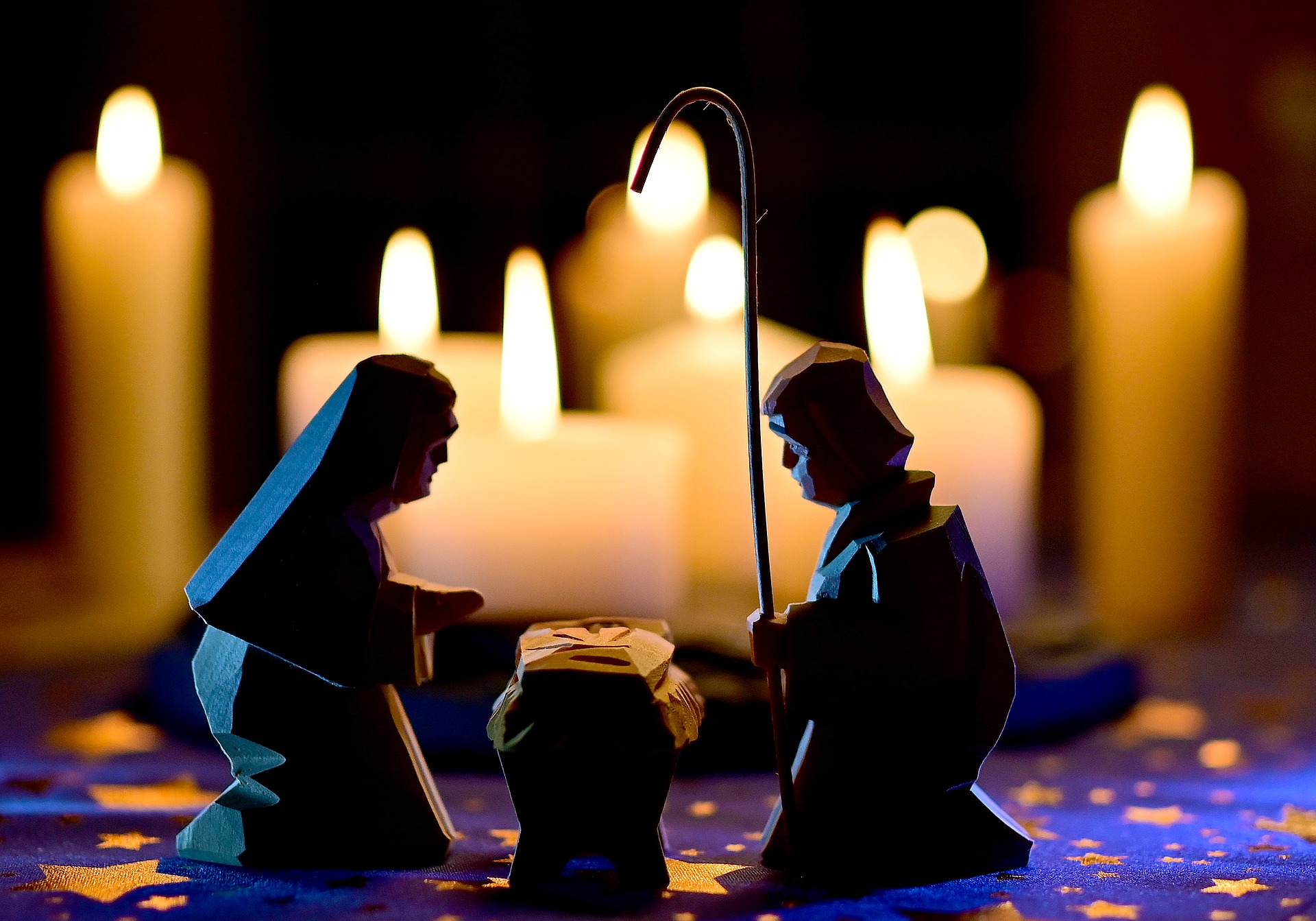 Frances had a nativity set up in every room, each one unique in size, shape, and style. She collected miniature ornaments and kept them on display all year round. She wrote Christmas plays, spending months writing, planning, sewing costumes and painting sets.  Her poetry centered on a Christmas theme and each year she wrote a new poem to be included in the family Christmas card that she sent out to all of their friends.

Why? What was it about Christmas that drew Frances?

Frances Alice Blogg grew up in a Victorian middle class household that was perhaps troubled. Her mother suffered from depression, her father may have had affairs. George Blogg died of a heart attack at the youthful age of 41, when Frances was just fourteen. Her broken home only continued to break more as time went on: her beloved sister Gertrude died in a bicycle accident, and her brother committed suicide. When she met and married Gilbert Keith Chesterton, she may have thought her life was complete. Her broken family was once again whole.

But she continued to experience brokenness. The early years of her marriage passed, and no babies came along. The couple saw several doctors, and Frances had operations, but nothing cured the problem. And the couple failed to do the one thing Frances had wanted more than anything: to have a whole family. And what she experienced instead was more brokenness.

However, their infertility did not overwhelm them. Gilbert and Frances were a strong couple, they had faith, and they believed God had a plan for their lives. They made a decision to welcome all children, and this extended to the Christ Child—or perhaps instead the Christ Child inspired them.

From the moment they discovered that they could no longer hope to have biological children, Gilbert and Frances seem to have made a pact. They would welcome children into their homes and hearts as often as they could. When choosing the railway car when they traveled, they chose the car with the most children. If families came over to visit, they made a point to talk to the children and made sure they felt welcomed.

At first, the couple had one nativity set, which they set up each Christmas. But during their early travels, Frances came upon another nativity set she loved, and when she got it home, she set it up immediately. From then on, whenever she saw a set she liked, she bought it and set it up in another room.

And as she looked at that nativity, with tiny little baby Jesus, she began to contemplate that wintry scene. She used her imagination to wonder what it would be like to hold the Christ Child? What if she touched his tiny hand? What if she felt the ox and ass breathing in the stable? What if she saw Mary and Joseph?

And as she thought about these things, and more, she began composing poetry. How far is it to Bethlehem? She wondered, perhaps even looking on a map. But then she thought of another layer to that question. How far is it for me to get to the Holy Family? Can I have a holy family…even if I don’t have children? What kind of family do I have if I invite Jesus—in the hidden disguise of my neighbors, nieces and nephews—into my family?

Frances and Gilbert wondered what it would be like to adopt a baby. Frances’s sister Ethel lived nearby and had five children, and two of the girls were particularly close to their Auntie Frances and Uncle Chestnut. Should they adopt them? The idea was contemplated, and then dropped. The girls were already family.

During this time, Frances wrote a lovely Christmas play called The Christmas Gift, in which the father, missing in the First World War, finally returns home with a foundling in his arms. The parents already have three children, but the mother takes the baby in as her own. “Is he the Christ Child?” asks one of her children. “Oh darling, who can tell?” Frances has the mother answer. She reminds us that every child is an image of the Baby Jesus, and any baby just might be the Holy Child

Frances invited the children visiting her home to play games, cards, or sit and talk while sipping tea. The teen girls noted that Frances was a good listener and particularly helpful to them when they entered adolescence. But she was also good at making treasure hunts for the smaller ones. And then she loved plays and pageants. In a cupboard in the morning room of their home, the Chestertons had boxes and boxes of fabric and costumes, and wigs and props of all sorts. Putting on a play or dressing up to spontaneously perform some bits from Shakespeare were common activities at the Chesterton home. Frances got all the children involved, painting sets and hammering boxes for tables. The Chesterton home had an interesting design element — in the living room was an area raised up a step, that had a curtain across it that could completely close. This area was made for putting on plays right in the living room. One small step, and you were on center stage.

Another happy place at the Chesterton home was the garden. Frances poured over the gardening and seed catalogs that came to the house, picturing the plants and how they would look in the garden. She loved planning out the order of the colors and planting tall spiky plants like foxglove, delphiniums and hollyhocks. Gilbert would give tours through the garden making up names for all the flowers, saying things like “Look, that one’s monk’s breath. This here is Bishop’s Bigamy,” and so forth. He said these words so seriously that most people didn’t catch that he was joking. Frances encouraged the children to pick bouquets and arrange them in a vase, and as they arranged, they talked about life. The children played hide-and-seek with each other and fetch with the dog. The Chestertons had a slew of pets, including a donkey for the children to pet.

There’s a saying that is sometimes repeated, although it seems more in the category of legend since there’s never a source, that is this: Frances says to Gilbert, “Darling, why don’t you write more about God?” as if she’s critical of Gilbert’s writing in the journals of the day. “My love,” Gilbert supposedly says, “that’s all I do write about.”

As I said this may have never happened, and I suppose one reason I don’t like it is because it puts Frances in a bad light. But when I do think about if this conversation ever did take place, I like to think that it’s a little joke between Gilbert and Frances. This couple talked about God together and they prayed together. And Frances often read over Gilbert’s essays and made small corrections in spelling and grammar (for which she jokingly charged him a penny per correction), so she knows exactly what his essays are about and how he thinks about God. So I like to think she’s joking when she asks why he doesn’t write more about God. How can you write more about God when everything you write is about God?

Gilbert and Frances were obsessed by Christmas, because both of them loved the Christ Child—and because they loved children. Their poetry, plays and home decoration all reflected this; but more than that, their lives reflected this. Let us love the Christ Child and all the children that ever come into our lives, whether biologically or otherwise—as they both demonstrated.

Nancy Brown is the author of The Woman Who Was Chesterton, a biography of Frances isChesterton, wife of British Journalist G.K. Chesterton

There are no upcoming events at this time.